In September we migrated our Xero authentication tokens to use OAuth2. We recognised some issues of late where customers were receiving Object Reference not set to an instance of an object errors after doing an Invoice Sync. These errors were found to be related to an OAuth code change and have now been resolved.

This latest release features some changes to User Management for ConnectWise customers, making it simpler to update a user's role and to delete a user.

Ability for Account Admins to update user roles (ConnectWise only)

Previously, in order for an Account Admin to update a user role for an existing user, a support ticket needed to be created, or the original user would be deleted and a new one created. This created unwanted downstream issues, as the email address for the new user already existed for the original user.To help resolve the need to delete a user, we have now provided Account Admins with the ability to edit a user’s role in the Wise-Sync > Edit User > Wise-Sync User Account screen.

Wise-Pay access can only be granted for an existing user by checking the relevant checkboxes in the User Access Management screen in Wise-Pay. 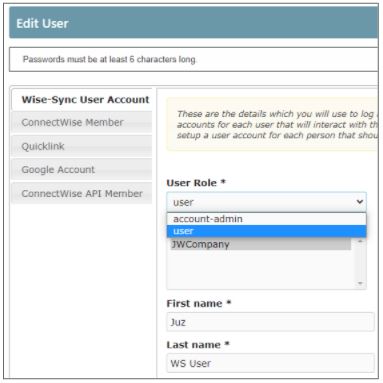 You can refer to our Knowledge Base article on how to Configure Wise-Sync User Accounts.

Removed the need for a user to be deleted (ConnectWise only)

When a user is disabled, they still appear in the Wise-Sync User List, the Wise-Pay User List, and the Wise-Pay Proxy User Lists, which causes much confusion. As a result, Support would be required to hard delete disabled users in the database. This is not a great user experience for our Account Admins! As per the above, deleted users also caused downstream impacts when new users with the same username and/or email address were created.To combat the user deletion issue, we have removed the ability to delete a user from the Wise-Sync User screen, and retained the simple ability for them to be disabled.On the User screen, we have added a disabled user filter; checking this will display all active and disabled users, not checking this will only display active users.Going forward, if a user needs to be reinstated for any reason, simply re-enable and edit the disabled user instead of creating a new one.To avoid any confusion, disabled users no longer appear in any user lists in Wise-Pay. By not needing to hard delete users, we can still ensure historical records are retained and not deleted along with the user.

You can refer to our Knowledge Base article on how to Configure Wise-Sync User Accounts.